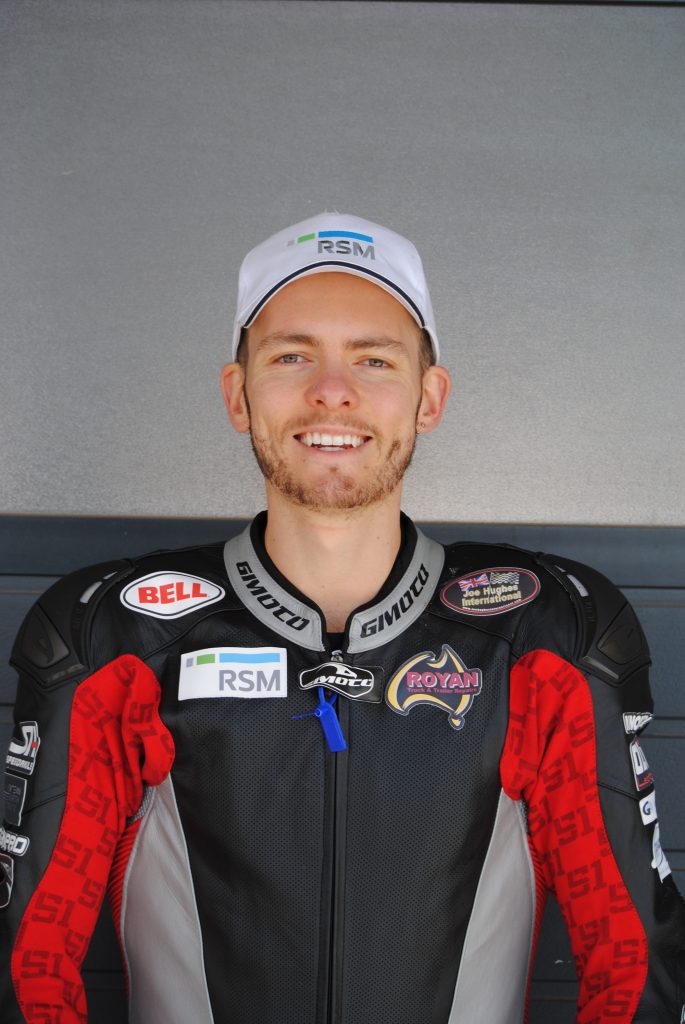 Hear from Brayden himself:

I have always wanted to ride motorcycles. My interest in motorsport started at a very early age, with watching video recordings of Crusty Demons and trying to be like them on my three wheeled trike in the back yard. At the age of three my dad taught me to ride on an old PW50 that my Pop had bought for the grandkids. The bike had training wheels fitted and a sticker on he back saying ‘no cry babies allowed’.

I couldn’t get enough of riding and it became my first and abiding love. Seeing my enthusiasm, it wasn’t long before my parents brought me my own bike, and I competed in my first race at the age of four. I certainly wouldn’t say I had a natural ability for racing in fact I was always getting lost around the track. But I was a determined little boy, and every time I fell I picked myself up and continued riding. It wasn’t a desire to win that first attracted me to riding/racing motorcycles it was more the feeling of freedom and speed that can’t be matched by anything other than riding a bike. Soon it wasn’t just a hobby and every weekend my entire family – mum, dad, pop and my sister were travelling to a different track – me getting faster and all of us learning as we went. Along the way I picked up many dirt track skills, steadily becoming more skilled and getting faster.

My first taste of success was when I was seven years old. I finished 2nd in the Australian Dirt Track Titles at Cowra, NSW.

My family has always done their very best for me. Over the years they have made sure I have had access to the best machines, and top notch mentoring and coaching. I continued to race every weekend gradually working my way up through the dirt track classes, with many crashes and broken bones marking the way.

Although I have been racing since a very young age, I was never pushed or pressured to race by my family, in fact the opposite. They gave me the freedom to do what I wanted and supported me in every way possible, no matter what other people said, or how much of a toll it was for them.

In 2006, at only 11 years old, racing took its heaviest toll of me and my family. I was involved in a huge crash competing in the State dirt track titles. I was taken by air to one of the best children’s hospitals in Australia, and put in an induced coma for nearly a week. With bleeding on the brain and a number of broken bones I was extremely lucky to make a full recovery and even luckier to convince my parents to let me ride again.

With over 6 months off a bike recovering, and 18 months off racing I had to start all over again. My first race back was a disaster. The leading rider’s bike blew up right in front of me, and once again I was back in hospital, this time with a broken shoulder, elbow and wrist. An unfortunate part of a sport I love with all my heart, although in the early years it didn’t love me back as much as I loved it. The harsh reality of my early years is that I was not a major success, but the desire to succeed burned strong within me, as did the dream to one day race professionally.

As I got older my luck turned. I continued to focus on dirt track and speedway racing, competing at the highest national level. As I stepped up to bigger bikes I had great success in dirt track with many wins and podium finishes at numerous state and national championships. With all of my experience coming from the dirt track my attention was focussed on pursuing a speedway path to race overseas.

At 16 years old I had just finished school and started my apprenticeship at my family’s local motorcycle repairs and accessories shop. I had always wondered what it would be like to ride a road bike and was constantly nagging people I knew to let me have a go on their bike. I had started to earn my own money and come of age to have a licence, so I bought myself a street bike and had my first taste of riding on the road. I loved the grip and speed that a road bike offered, but hated the cars and other traffic on the road that I couldn’t control.

Riding on the road made me question whether I wanted to continue riding on the dirt or give road racing a try. Not long after a friend agreed to let me ride his CBR600 at a track day at Winton Raceway. Given my uncertainty, this was something I needed to try before I continued to pursue a dirt only career. The rest as they say is history. I loved the experience, the speed and a sensation like no other. Although I wasn’t immediately fast I knew right away this is what I want to do! Weeks later I sold my street bike and bought an ex Team Suzuki practice bike, a GSX-R600.

I continued to ride in all three disciplines, dirt track, speedway and track days on the 600. I was still achieving great results in dirt track, but in trying to master all three disciplines time and expense became a major issue. During this time I was chosen to be a contender in a reality TV program, The Ultimate Rider, where my skills in multiple areas were shown being guided by people such as Darryl Beattie. With the dream of road racing consuming me, I knew things had to change. I trained harder than ever loosing 18kg to be more competitive and comfortable on the 600.

For the 2014 season I made the decision to focus only on road racing, competing in the Australasian Superbike Championship in the Supersport category. This was a huge leap for me – starting at the pinnacle of Australian road racing. I have always liked to ride with the best riders as it challenges me to improve my skills and speed, but even I knew that I needed professional guidance. On seeking coaching advice from Phil Tainton, he put me in touch with Shawn Giles, a recently retired superbike legend. After doing some one-on-one training with Shawn, where we both enjoyed ourselves, and the improvements made were outstanding Shawn agreed to join the team for the 2014 season. It was a year of highs and lows. I improved each time I rode the bike managing to finish the championship in 7th position. Not a bad result considering I missed one complete round with a broken shoulder, and that I was the only Suzuki rider in a field dominated by Yamaha. Following the 2014 season I was lucky enough to be invited to the Shell Advance Asia Talent Cup in Sepang Malaysia to have my first taste of riding overseas. It was an eye opening experience and something I was very grateful for, to be part of a small number of handpicked riders from around the world. 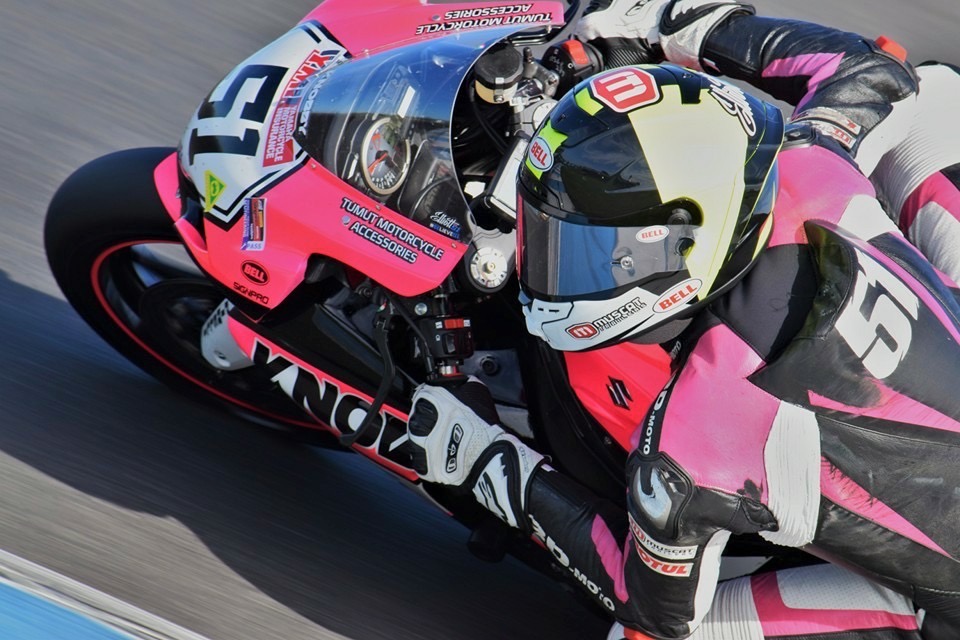 For 2015 I originally set out to achieve the one thing I needed most, time on the road bike. Shawn Giles again joined the team as my coach and mentor, as has Phil Tainton as head mechanic and crew chief. Shawn and Phil’s belief in me and support of me is amazing and something that I highly appreciate. With the continuous support of my family and outstanding help from sponsors we also increased the number of machines to three Suzuki GSX-R600 Supersport bikes.

Phil continued to do all major work and building of the bikes with all round to round preparation and maintenance being done by myself and my dad, as we have done throughout my racing career.

I am continuing to work at our family owned business, only now as a qualified motorcycle mechanic.

As 2015 progressed so did my ability and confidence on the motorcycle. Continuing to learn and improve at each round I found myself leading both the Australasian and Australian Supersport Championships, working to maintain this lead as the year progressed. With a combined total of 12 rounds the commitment and effort taking place behind the scenes was enormous, with the results displaying our hard work made the victories even more satisfying.

2016 saw another new year and all new challenges, making the step up into the premier Australian Superbike Championship, onboard two Suzuki GSX-R1000 Superbikes. With the continued support of Shawn and Phil also making the commitment to be apart of the team 2016 would prove to be a highly important year in my racing career as I continued to learn and develop as a Superbike racer competing against the best factory teams in Australia.

Throughout each round of the year I continued to improve, adapting my style while learning to race a Superbike. At the end of the 2016 season I was proud to finish 6th overall in the Australian Superbike Championship also finishing as 1st Privateer with two podium finishes. It was great having our teams hard work recognised by also winning the 2016 Best Presented Team Award, also being awarded the AMCN Rookie of the year award as well as being a finalist in the 2016 Australian Motorcycle News Rider Of The Year Samurai Award.

2016 was certainly a year of growth and development, also having the opportunity to taste international racing, competeing in three rounds of the MotoAmerica Superbike Championship. This was a great experience to learn new tracks, adapt to different bikes, being surrounded by different people in a very different environment. I was chosen to replace an injured rider for the ADR Motorsport Team, overcoming many obstacles to finish 12th and 13th racing at one of the highest levels of racing in the world.

I was very honoured to wrap up a great year being presented the 2016 Australian Sportsperson Of The Year Award.

2017 unleashed the biggest change in my racing career to date. Moving to England to compete in the 2017 British Superstock 1000 Championship racing on board a Yamaha R1 for CF Motorsport.

The decision to move overseas and compete in the toughest domestic road race championship in the world has certainly brought on a range of changes although I am confident this is the best choice for my career as I continue to work step by step towards fulfilling my racing goals.

In consultation with my personal management and mentors, we have steadily developed a career plan for the coming years which takes into consideration expanding my racing and continuing to work toward my ultimate goal of competing on the world stage.

My 2018 season didn’t begin the way we had anticipated with my plans coming to a halt at round 1 at Donington Park which forced me to miss the first three rounds of the Superstock Championship. However, we came out the other side better off as we were able to start our own team ‘NoBull Racing’ and continue in the championship as a privateer team with an intimate selection of people behind me supporting me through the remainder of the championship.

2019 will once again see me competing in the British Superstock 1000 Championship over in the UK. I will continue to ride for my own team NoBull Racing on a Suzuki GXR 1000 R. We welcome on board new support and new attitude with the same goals still being to be present on the podium representing Australia.